Our Anita at Power of the Purse 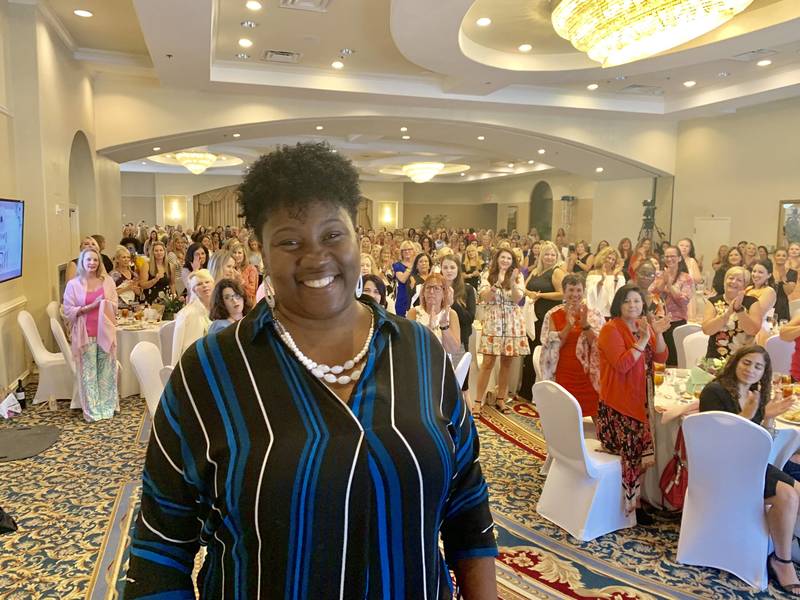 The following is Anita Dudley's bio from the program of the 16th annual Power of the Purse Luncheon and Silent Auction presented by Women United Volusia on Aug. 16 at the Plaza Resort and Spa in Daytona Beach. Click here to watch a video of her speech on Facebook.

“Homeless” was a hard word for Anita Dudley to carry. She realized it had been thrust upon her — and her six children, from a newborn to a teen — when they were evicted from their apartment late in the summer of 2008. Rather than let it crush her, she immediately began the hard work of leaving homelessness behind, and in the process found her calling.

Ms. Dudley, 41, guides other families on the journey out of homelessness as a program manager for Family Renew Community, the same local nonprofit organization that helped her family along that path so many years ago.

Anita Dudley’s descent into family homelessness started with a difficult pregnancy requiring bedrest, a husband’s unemployment and a marriage that broke under the financial and emotional strain. About three months after the baby’s birth, Anita was newly single and thrown out of her apartment for inability to pay the rent. At Family Renew, she found housing and a gateway to a broader community that cared enough to offer resources and hope for a better future.

Even before her own experience of homelessness, Anita knew she wanted to be part of this network of helpers in Volusia and Flagler counties. She grew up in Daytona Beach and attended Volusia County public schools after moving from South Florida at age 4 with her parents and three siblings. She completed an associate degree in human services at Daytona State College in spring 2008, just weeks before her world starting falling apart.

While living in a Family Renew apartment in Daytona Beach, Anita resumed her education. She completed a bachelor’s degree in psychology in 2011, shortly after moving her family into a home of their own.

She started her professional career later that year at Haven Recovery Center, working first with addicted mothers then with homeless individuals with co-occurring mental illness and substance abuse. In 2013, she became a Healthy Families program supervisor for the Healthy Start Coalition of Flagler & Volusia Counties. Since 2015, she has run Family Renew Community’s Holly Hill housing program for families experiencing homelessness.

Anita’s favorite pastime is having “family night” — playing board games or basketball with her children. The two oldest, Vanessa and Timmie, are in their 20s. Tamera is 17, Isaiah 14, and Brianna 13. The baby, Joshua, is 11 years old.